Some say spring is when true skiing starts in Colorado. While chasing powder in the winter is great, as the weather warms the snow generally stabilizes, providing access to bigger lines and long days full of exciting backcountry turns. Whether you’re new to the touring world or wrapping up your 36th month in a row of skiing/riding, we’ve compiled seven Northern Colorado spots worthy of exploring this spring. 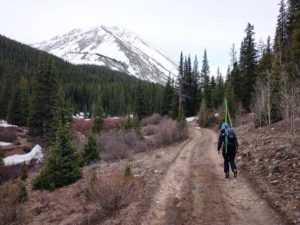 Torreys Peak looming over a few creek crossings and mostly dry ascent to the base of the mountain. Photo: Kyle Judson

Perhaps you’ve set a goal to ski your first 14,000 foot mountain, or are on track to ride all of Colorado’s 14ers – regardless of the long-term goal, spring is the time to start checking off high mountain descents.

This peak has multiple routes and is frequently skied, but all the ascents and descents are worthy of the time and effort. With relatively easy access off of I-70, this is a great spring tour.

Colorado’s highest peak, Mount Elbert presents several fun couloirs to pick from. Plus you’ll gain bragging rights once you’ve stood on the summit then strapped boards to your feet and slid down, hopefully getting in good turns.

If steep ascents and tight shoots are not your jam, Quandary Peak is the right 14er for you. This is one of the easiest 14ers – there is almost always a set skin track up to help and a wide open ridge takes you back down. 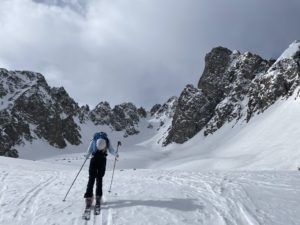 Nokhu Crags is a hidden gem of fun couloirs and great views in the northern region of Colorado. Photo: Erika Lee

It’s important to still be aware of potential avalanches, and feel confident with route finding and advanced ski mountaineering skills before taking on bigger objects. That said, as the snowpack settles, spring generally delivers ideal conditions for heading into more complex backcountry terrain. Here are two great zones to put your ski mountaineering skills to the test.

With majestic views, steep couloirs, technical approaches, and options for wide open bowl riding, the park is a great spot to explore complex lines and practice ski mountaineering on some of the most iconic routes in the US.

Sitting between Fort Collins and Walden, Cameron Pass is an often overlooked Front Range zone. While a bit farther than Rocky Mountain National Park, there are fewer people and more fresh tracks to be had. The Nokhu Crags area has multiple versatile couloirs with an easy approach, and certain aspects off of Diamond Pass hold snow through May. 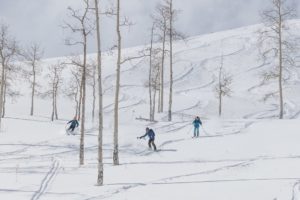 Riding laps next to friends on stable slopes is one of the best parts of spring backcountry touring. Photo: Justin Wilhelm

One of the best parts of spring skiing is the long days in the backcountry complemented by riding with all your best buds. If you’re looking for simple terrain out of avalanche danger to party lap, here are some of the best locations.

Sitting at a higher elevation than Berthoud Pass, Loveland is an easily accessible zone to lap with friends and family in the spring. You can find mellow bowls and steeper options for all levels.

Roosevelt National Forest encompasses these two wilderness areas that are about 1 hour north of Boulder. Often overlooked by backcountry enthusiasts, these zones offer hidden powder stashes in the trees and long ascents to alpine lakes. You’ll find less people and more space to explore with plenty of options for both simple terrain and bigger lines.

Looking for tools to start planning your next spring adventure? OnX Backcountry has awesome resources on how to start trip planning for touring along with a snow-specific GPS navigation application to help you complete your spring backcountry objectives.

As the last patches of snow melt away on Bear Mountain, we can’t help but think back to what a great season we had. From fun events to reaching big milestones, 2021/2022 delivered endless smiles and memories that will last a lifetime. Here’s a recap of our Top 10 favorite moments from the past season, along with a few honorable mentions. 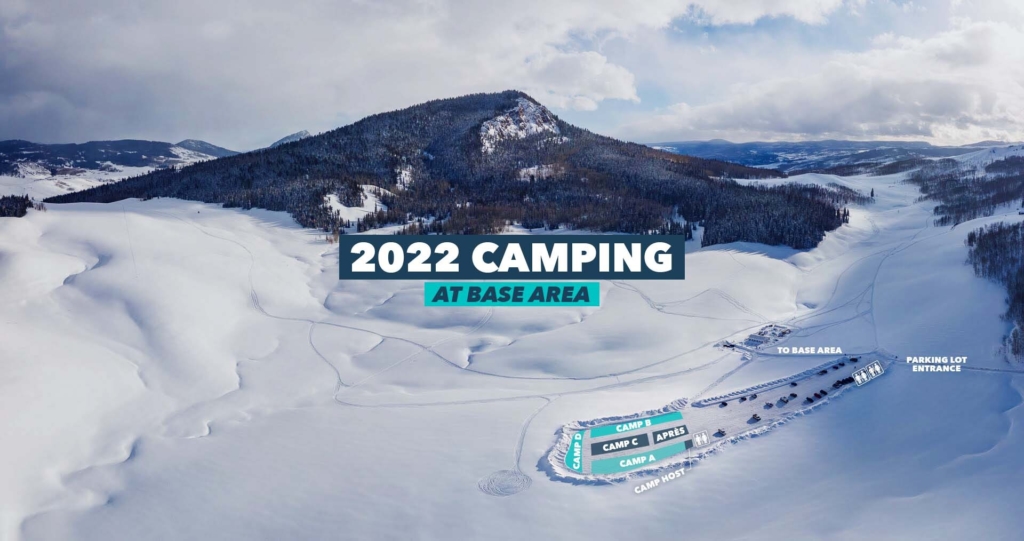 Not too many other ski areas can say that they allow slopeside camping, which is why we were thrilled to move Camp Bluebird to the parking lot, cutting out the commute and placing guests only steps away from the Base Area. 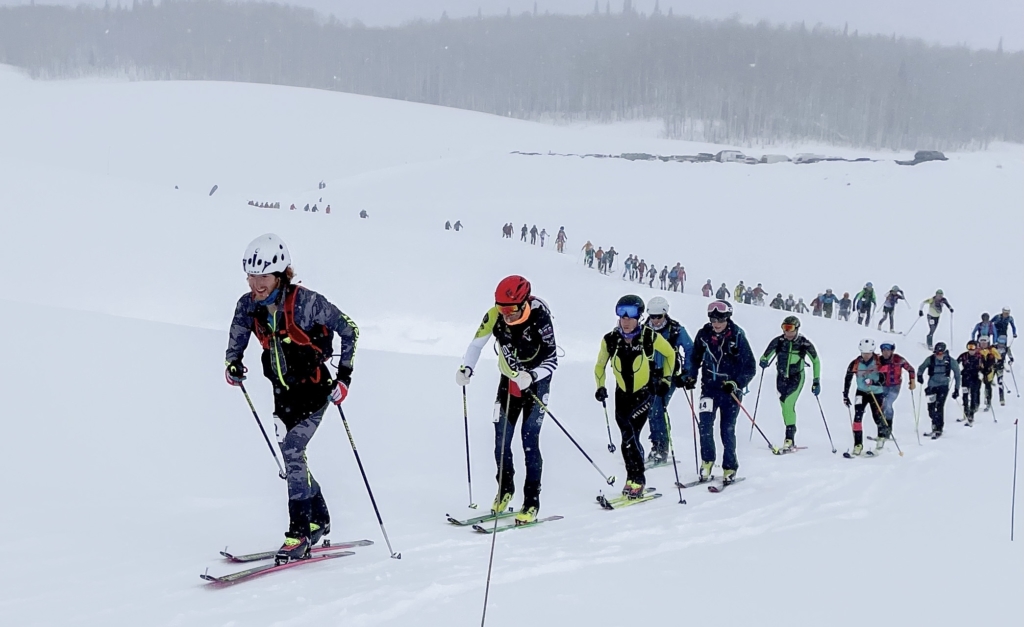 Racers make their way out of the Base Area and out towards Bear Mountain. Photo: Erik Lambert

#9 | The Return of Skimo Racing

This past season, we welcomed another winter of skimo races with not one, but TWO events. We kicked off the skimo season at Bear Mountain with our first ever Beaver Brawl, which served as a warmup to our challenging Bacon Brawl. The Bacon Brawl delivered over 4,200 feet of elevation gain and a steep bootpack before sending racers speeding toward the finish line. 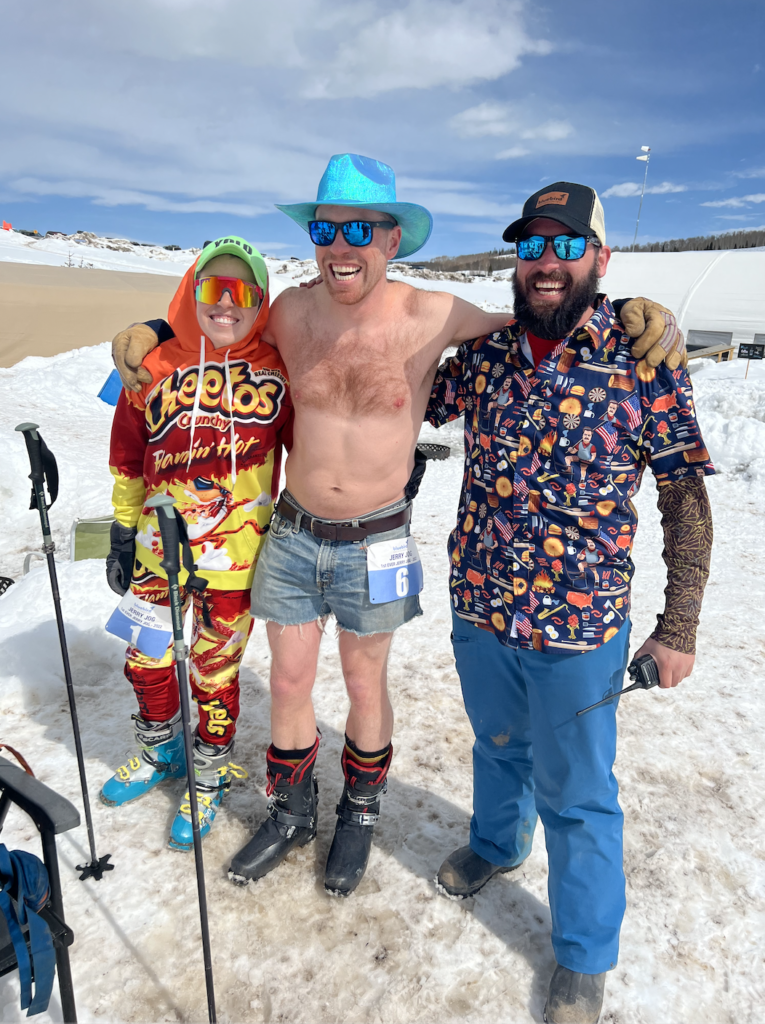 Dressed in our Jerry best for the inaugural Jerry Jog. Photo: Pat Ahern

We have a lot of respect for skimo racers, but let’s face it — most of us aren’t badass skimo racers. In an attempt to pay homage to the spandex clad, fast as hell skinny ski enthusiasts, we decided to put on a much more relaxed “skimo” race (if you can call it that). From a wild idea consisting of obstacles, costumes, and bacon-eating, the Jerry Jog was born. 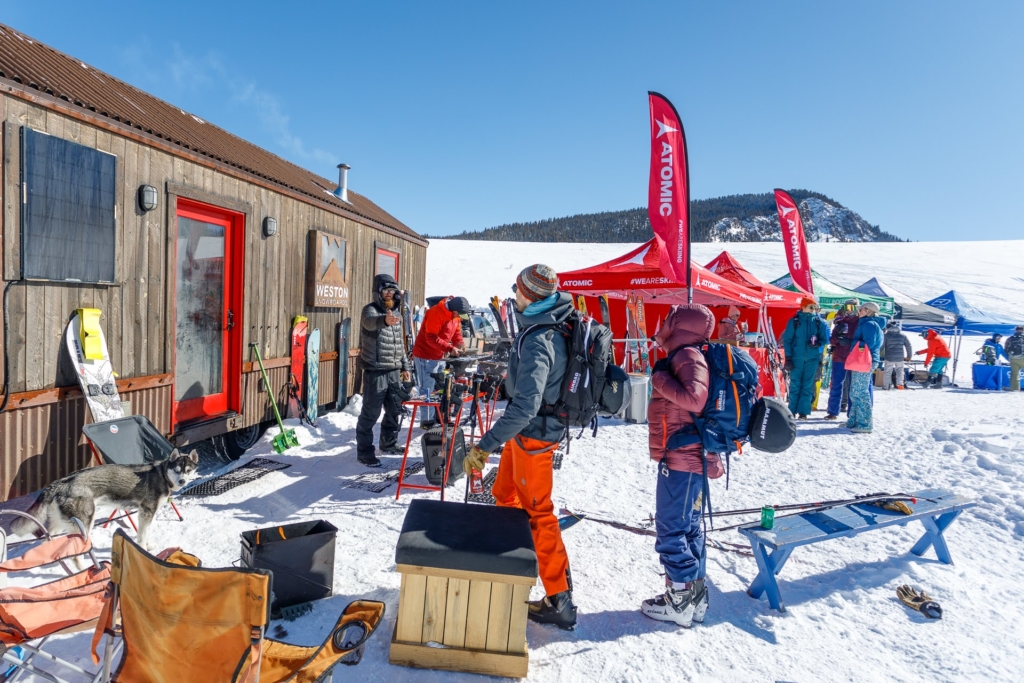 Our second annual Gear Fest offered guests the opportunity to demo equipment and talk to gear experts across the industry. Photo: Justin Wilhelm

Returning for its second season, Gear Fest brought tons of vendors from across the ski industry to the Base Area for a weekend filled with demos, meetups, clinics, enlightening discussions, and more. Weston offered a free Intro to Backcountry tour, and High Country Dogs provided a fun clinic for dog owners wanting to learn how to explore the backcountry with their furry companions. We can’t wait to see what next season’s Gear Fest delivers. 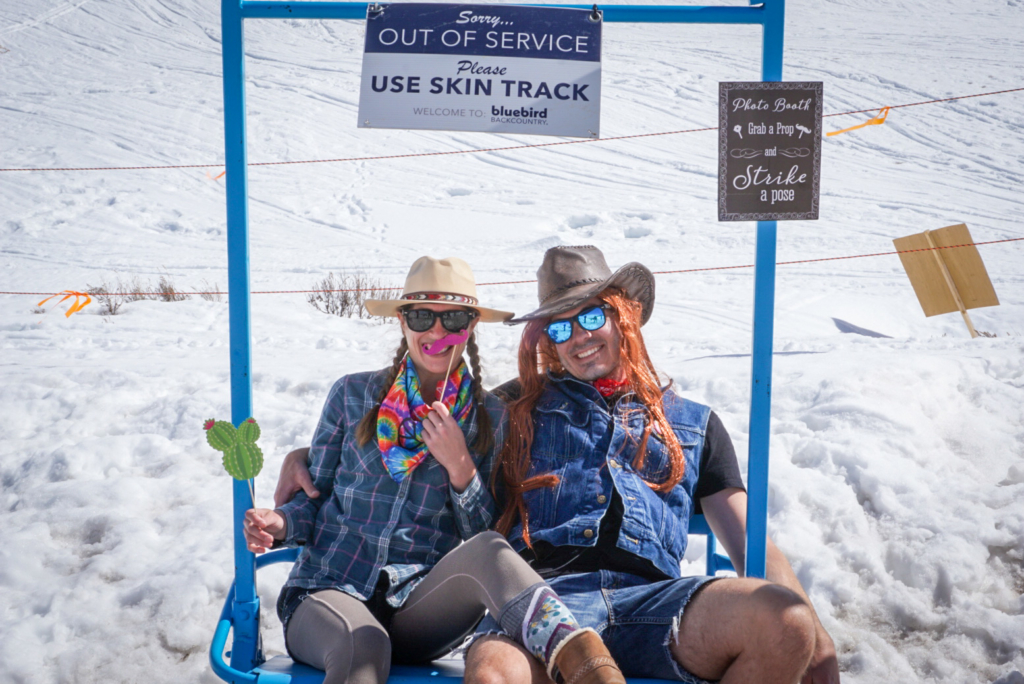 Taking a break from the festivities at the Bear Mountain Rodeo photo booth. Photo: Ti Eversole

It only seemed right that a great season should go out with a bang. This year, we decided to add a theme and a full lineup of events to the weekend — and the Bear Mountain Rodeo was born. Guests donned their best Western attire while enjoying perfect spring conditions. Happy Hour and a Sunset Tour followed, complete with s’mores, a bonfire, and the inaugural burning of the chairlift to send off the 21/22 season. 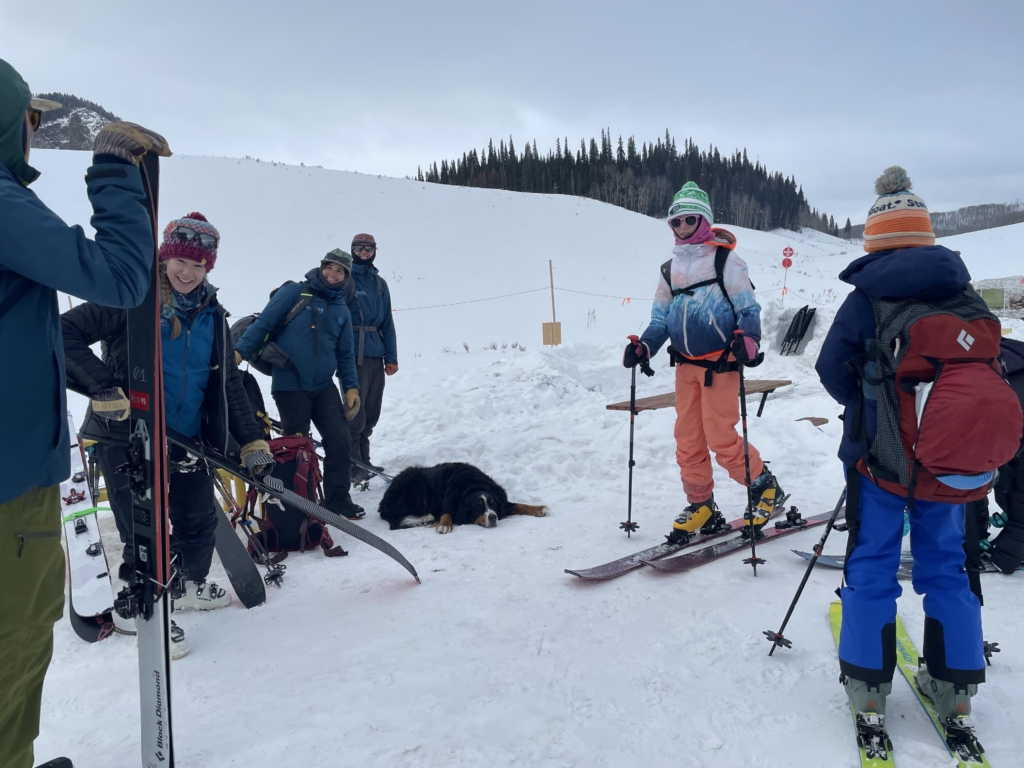 The Bluebird team helps a school group get prepped to hit the slopes. Photo: Melissa Baker

We believe that the backcountry is best when people from all ages and walks of life have access to the sports we love. This season, we hosted many different groups working to make the outdoors more inclusive and accessible. Ski Noir 5280 and Backcountry Together both joined us this season, and helped BIPOC individuals gain access to the slopes. SheJumps, Elevated Alpine, and VNTRbirds all visited Bluebird with the intent of getting more women into the backcountry. Schools and ski groups such as CSU Snowriders and Colorado College brought the next generation of backcountry skiers and riders to Bluebird for education courses or a day of improving skills on the slopes. 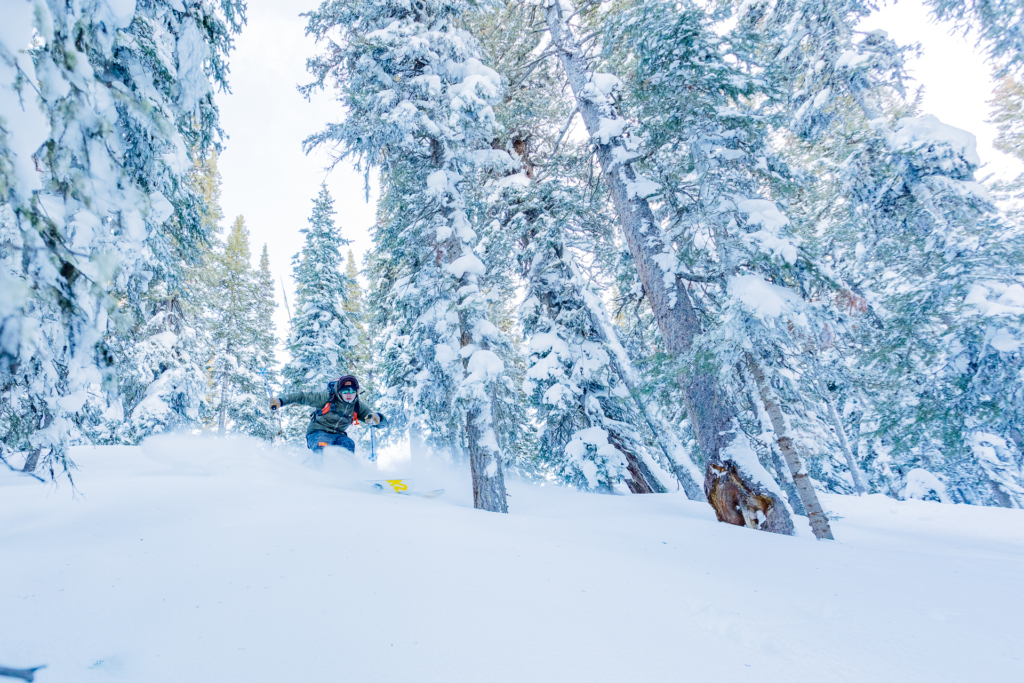 When it snows, it dumps! After a slight delay to the start of the season due to light snowfall, we were able to kick off 21/22 with a powder day on December 31. Another big storm quickly followed that resulted in the closure of all highway access to Bluebird on January 6, and guests were welcomed the following day to some of the best conditions of the season. Thanks to the amount of snow received from this first storm, our team was able to open Bear Mountain over a month earlier than we did last year — treating guests to new, never-before-skied terrain and fantastic conditions in the early season. 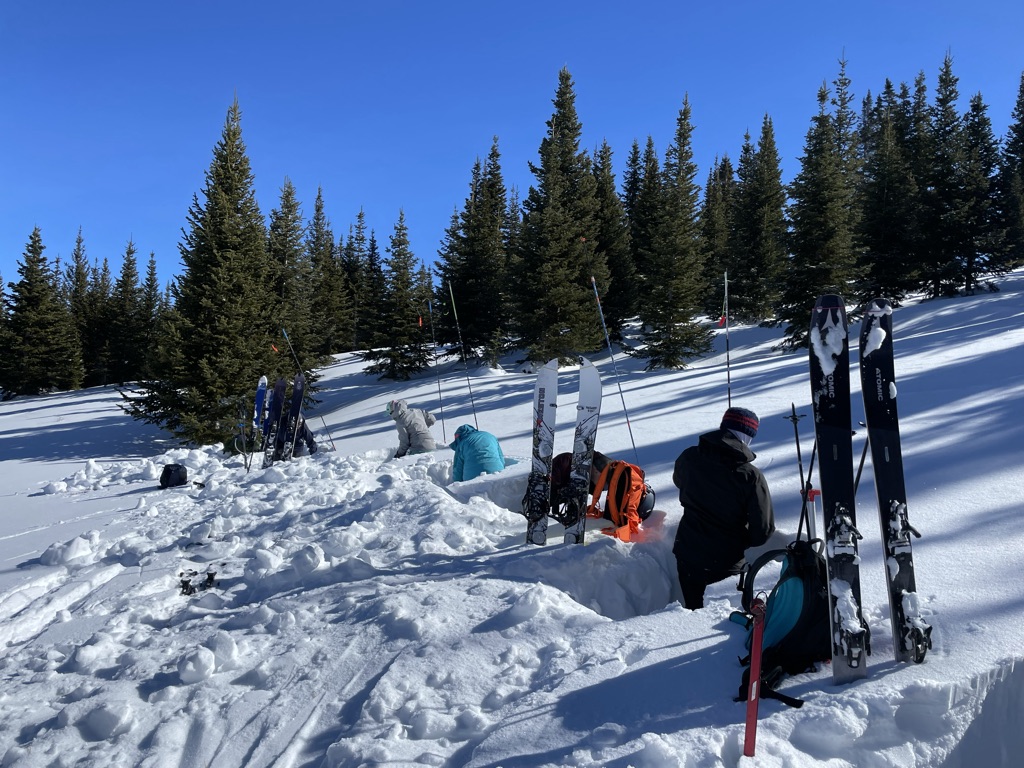 Bluebird was founded on the principle that backcountry education should be accessible at all steps in one’s journey to a better backcountry practice. Along with our gold-star AIARE education offerings, our education team developed a series of backcountry lessons ranging from learning the basics of backcountry skiing and riding to better understanding navigation techniques and advanced skills. In turn, we saw a huge turnout of guests wanting to improve their knowledge and understanding of how to move safely and more efficiently in the backcountry. 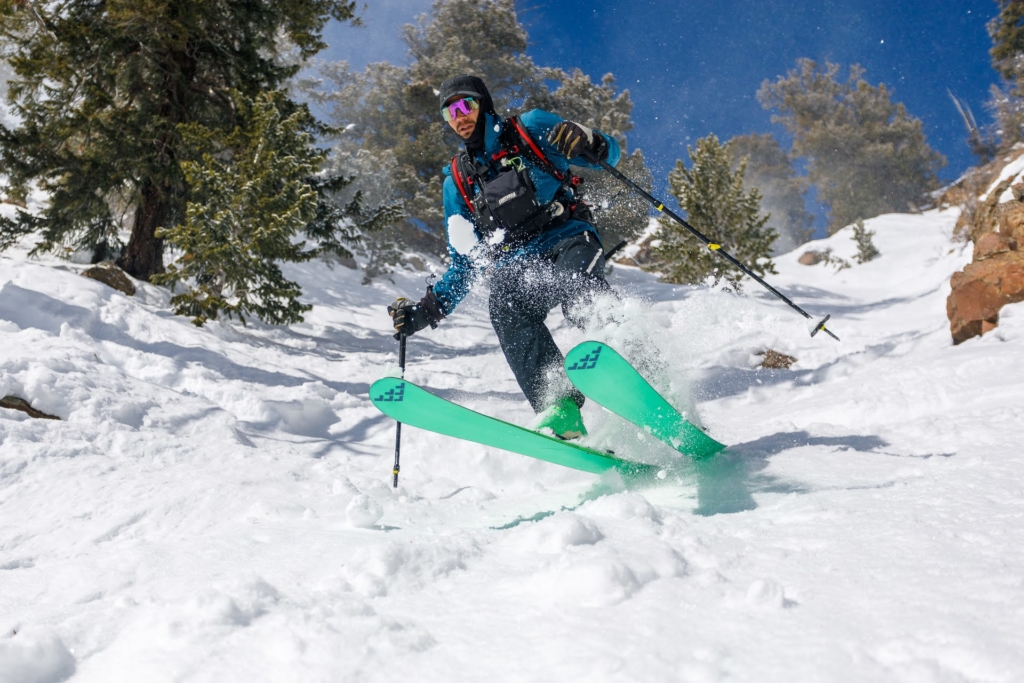 We were thrilled to announce the opening of 12 new trails this past season. A few trails such as Cougar Hunt and Ursa Minor opened in the early season, while others such as the Pucker Chutes needed to wait to open until conditions improved. Hailed as the most extreme terrain on Bear Mountain — think tight couloirs, technical descents, and a bootpack up the Bacon Strip — the Pucker Chutes finally got their moment to shine in mid-March once Bluebird Ski Patrol evaluated the terrain after our second best storm of the season, and gave the green light to send. Needless to say, Pucker Chutes received huge accolades from guests who came out to test the goods in the short window that these trails were open. 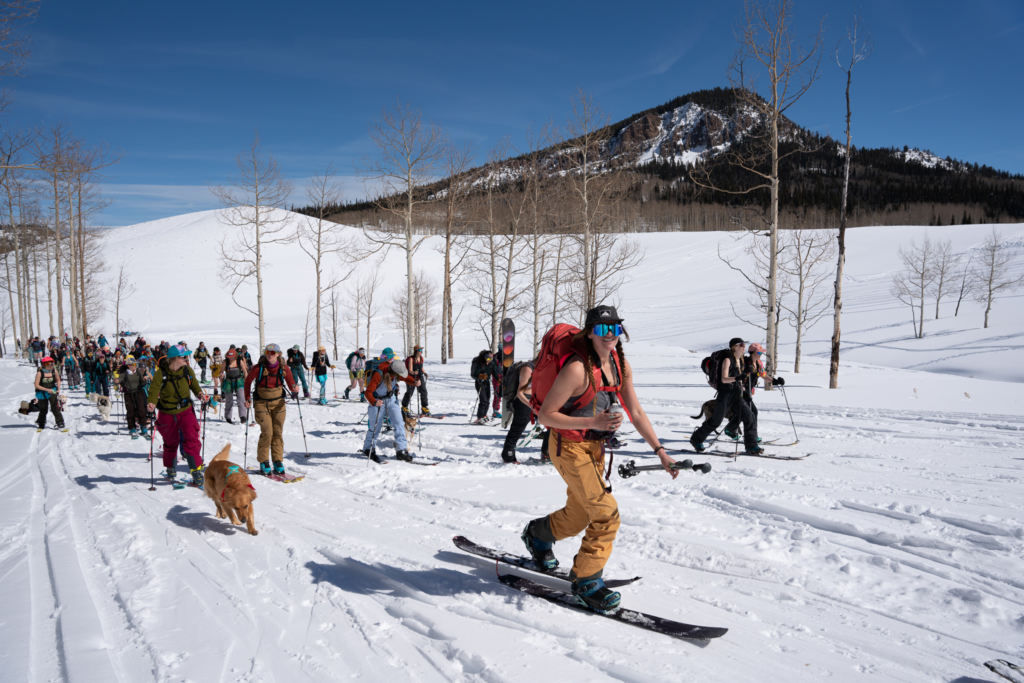 Ladies make their way to the summit of West Bowl for the naked ski lap during Boot Tan Fest. Photo: Nik House Media

Ladies, who’s down for a naked ski lap? That’s exactly what happened mid-March, when thousands of women, femme-leaning, and non-binary individuals took to the slopes at Bluebird for a nude run down West Bowl. Hosted by Wild Barn Coffee, the goal of Boot Tan Fest was to empower women of all ages, backgrounds and skill levels to come together to celebrate for a day of good vibes, friendly fun, and naked shredding. 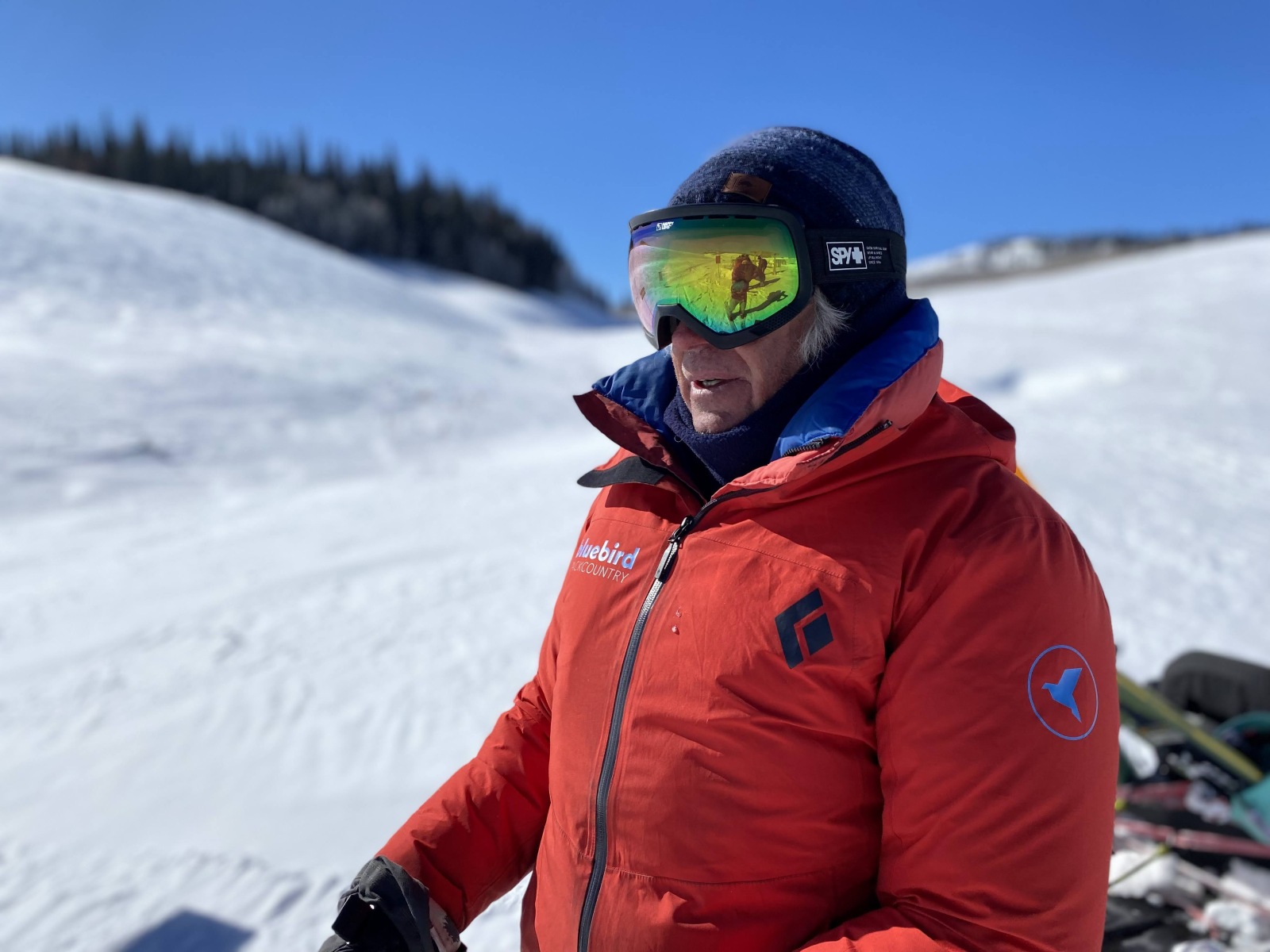 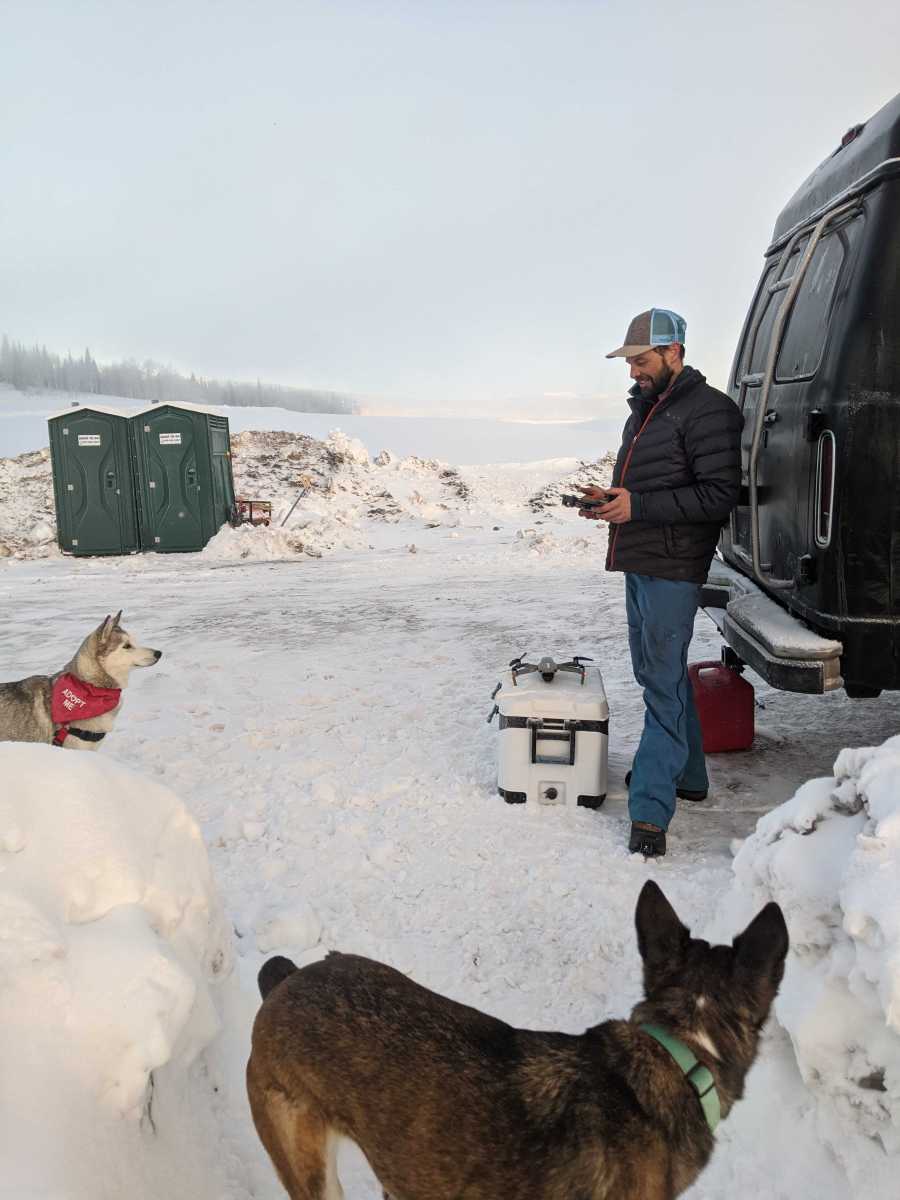 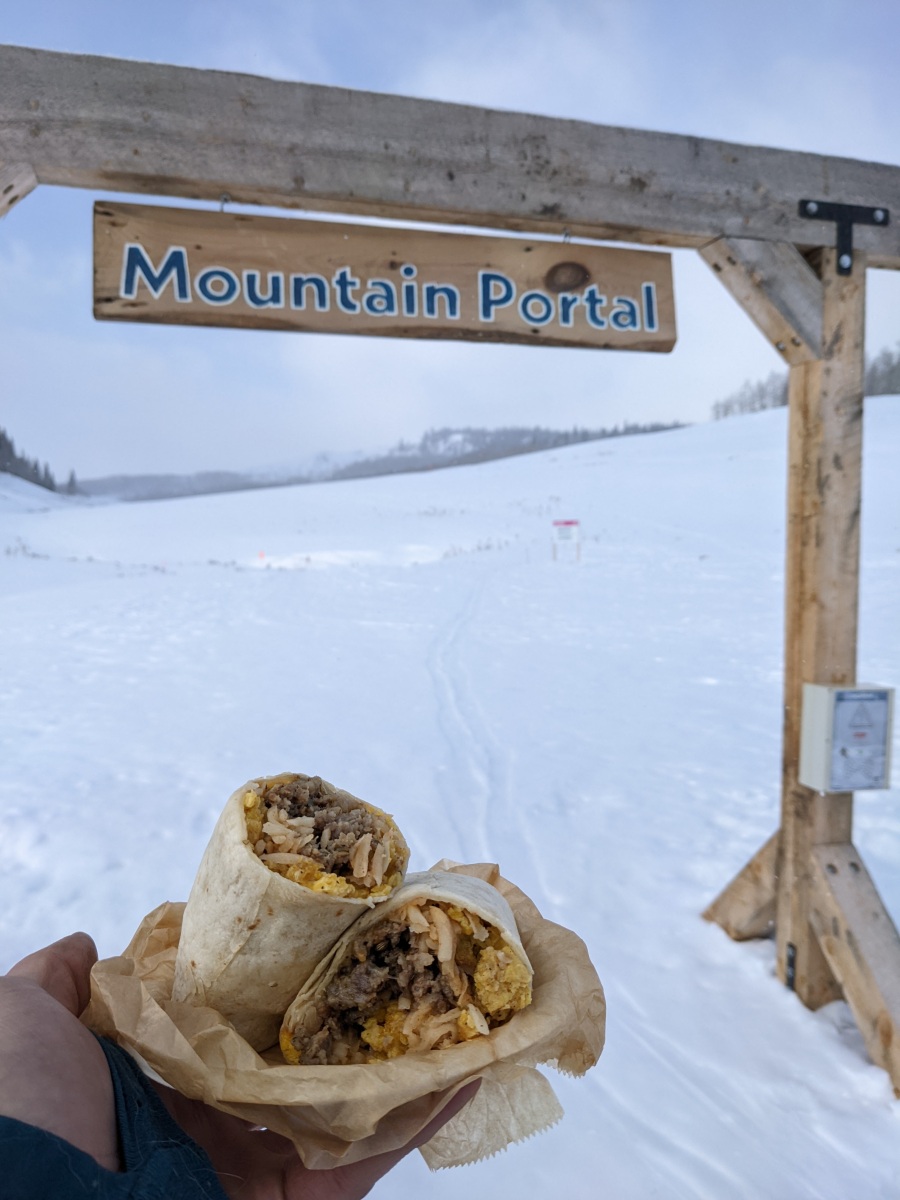 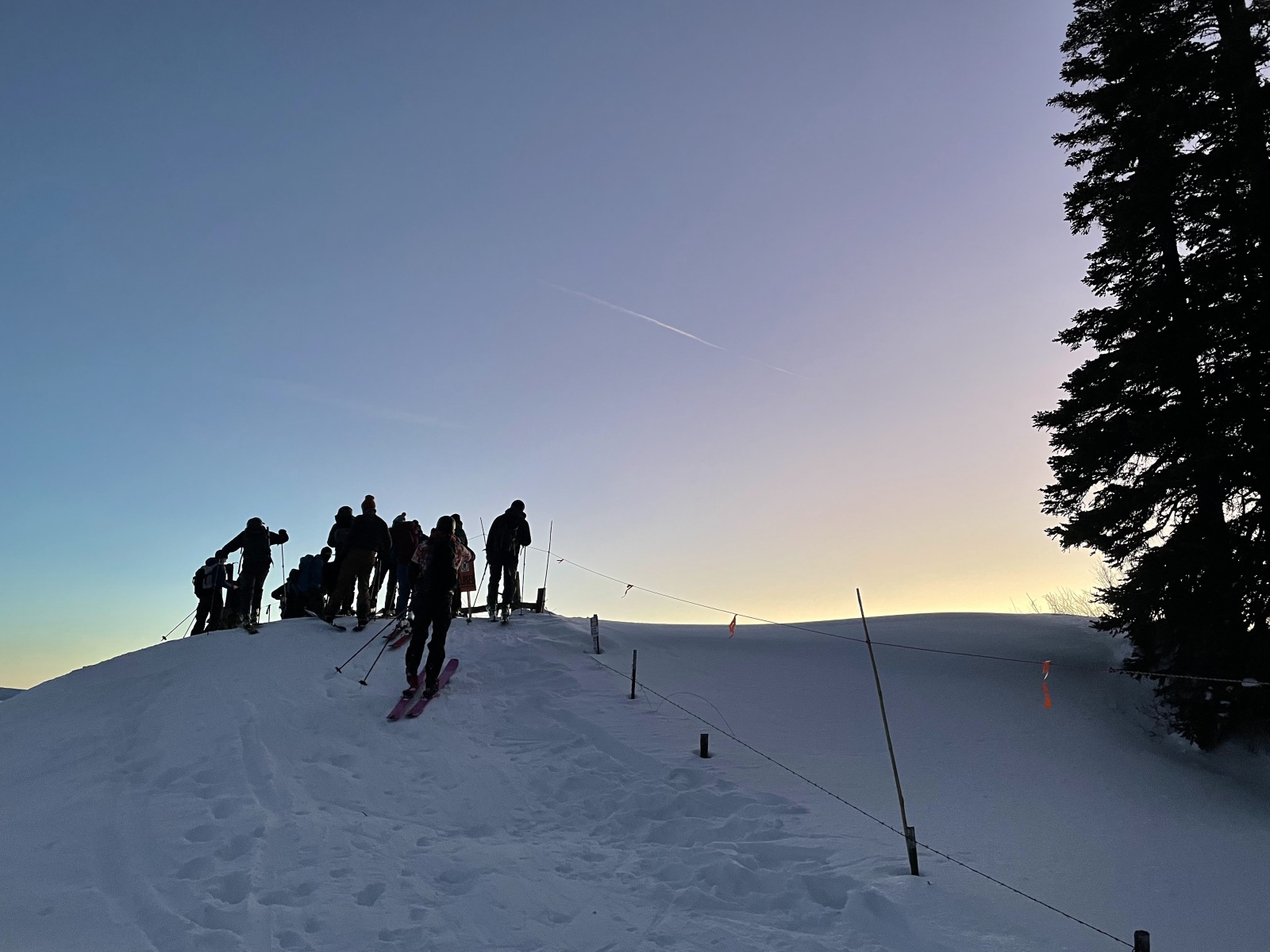 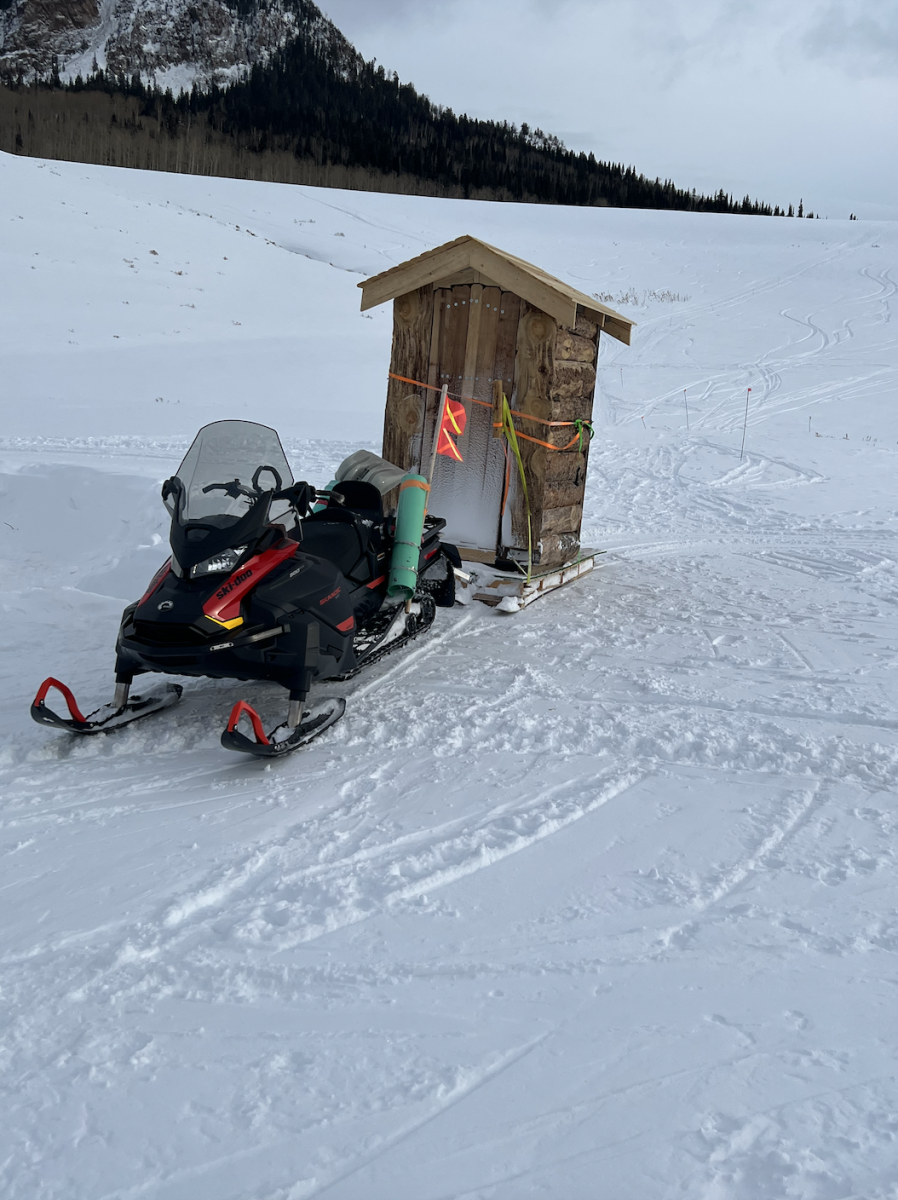 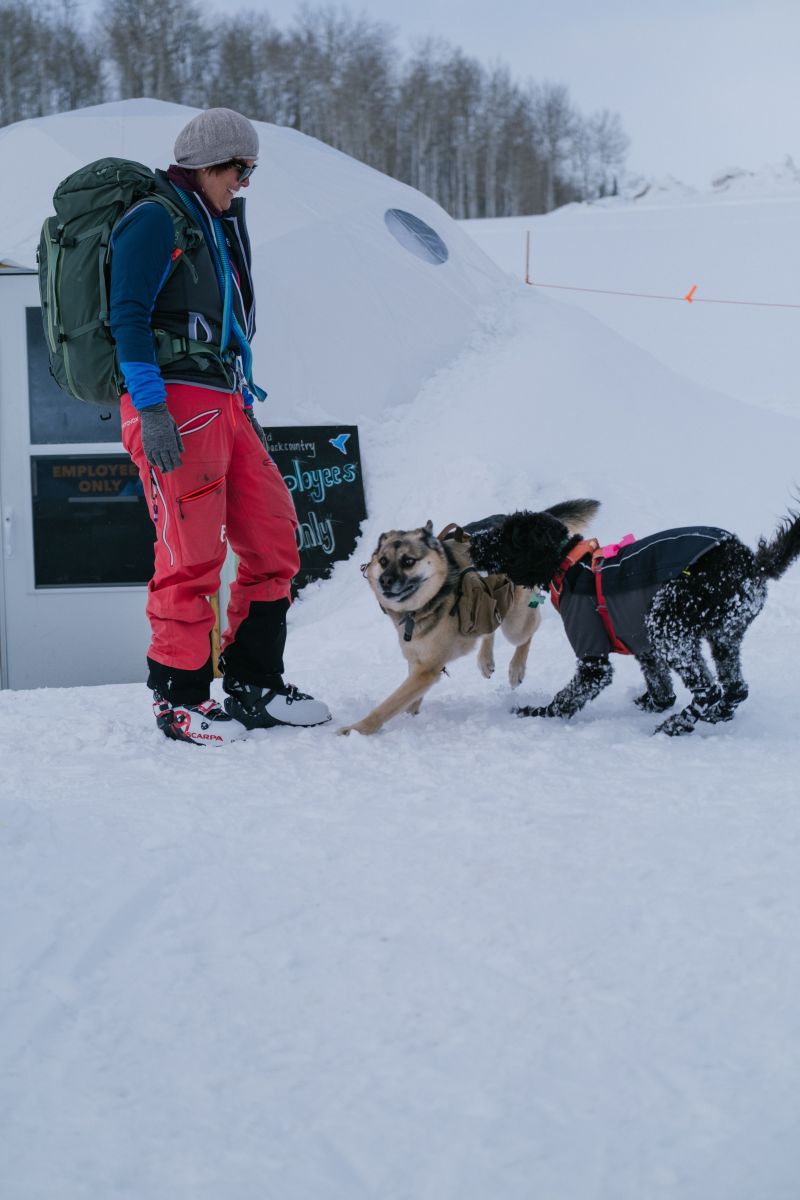 We’re looking forward to the return of many of these groups, events, and offerings next season. 22/23 Season Passes are now on sale. Get yours today and help us create more memories next winter.